A special screening of the movie “Walesa: Man of Hope” at the Angelika Film Center in Dallas, Texas, was presented by the World Affairs Council. The evening marked the 25th anniversary of the worker revolt that weakened the control of the communist-led government in Poland and resulted in the holding of free elections in Eastern Europe for the first time since World War II.

In addition to the screening, the evening featured a spirited and informative exchange between audience members and a panel that included Mark C. Fisher, managing director of the European offices of The German Marshall Fund of the United States; Gerald Kochan, director of the Polish American Museum in Port Washington, New York; and Charles Sullivan of the University of Dallas. 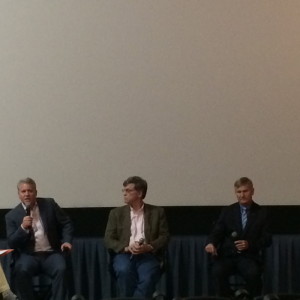 The audience members, which included several of Walesa’s colleagues from the Solidarity movement, had the opportunity to partake of European cocktails and foods during a pre-screening reception hosted by the World Affairs Council. The discussion after the screening of the movie drew parallels between the events in Poland as depicted in the film and the current political unrest in the Ukraine in which Russia is again playing a pivotal role.

According to panel member Gerald Kochan, the film, by Polish director Andrzej Wajda, focuses on the improbable rise to power of Gdansk shipyard worker Lech Walesa beginning in the 1970s. Under Walesea’s leadership, an uprising by Polish dockworkers against the Soviet Union’s influence in Poland spread throughout the population. The Solidarity movement eventually won acceptance from the Soviet government.

The impact of Solidarity soon spread from Poland to other countries in Eastern Europe as people in countries such as East Germany began demonstrations against what was previously seen as an invincible and all-powerful Soviet Union. Eventually, the movement resulted in the reunification of Germany and the collapse of the communist governments in Yugoslavia and the Soviet Union.

Walesa went on to win the Nobel Peace Prize for his leadership of the uprising in Poland. Walesa’s popularity was so great that the shipyard electrician who stood up to the might of the Soviet Union and won eventually was elected to the presidency of Poland.

Wajda’s film combines newsreel footage of the actual events in Poland with reenactments of events filmed in and around the city of Gdansk to tell the story of Lech Walesa. Both the director and his writer gave interviews prior to the start of production in which they explained that they intended to portray the Nobel Laureate as a human being with both strengths and weaknesses.

Gerald Kochan’s participation in the evening’s events was in keeping with his commitment to fostering an understanding and appreciation of the cultural values of Poland and its people in the United States and throughout the world. This dedication can also be seen in his leadership in operating the Polish-American Museum, which features dynamic exhibits and educational programs to showcase the rich heritage of Polish people in the U.S. and abroad.